Woohoo, done with school! (for now.) Done with Texas State, anyway. I finished my finals 10 days ago, but I’ve been enjoying my time off and relaxing (a.k.a. crafting) since then. Now that my brain has been able to decompress, I figured I should post an update. Ended up with all A’s, so that’s nice. I will start my new job in 30 days, so I get a nice break first!! Wow, I’ve needed it. I’ve finally gotten around to cleaning out the boxes from teaching middle school. When I packed up my desk/office, I left the stack of boxes in the spare room and there they sat for a year. I really haven’t had a good break since I left teaching (calling that phase one, returning to school = phase two, to explain the title.) Last summer, I started classes the Monday after school got out, and I got my tonsils out in the 2nd part of the summer, so I wasn’t feeling up to sorting through boxes. It’s honestly probably good that I waited this long to go through it, because now I felt in no way guilty about throwing away lesson plan notebooks or judge’s comment sheets. Really, not going to need those things again, and I needed a bit of emotional separation to be able to take that view. Mark and I (mostly Mark) painted the spare bedroom blue today. I can’t fully explain how nice it is to be able to do this stuff I’ve been thinking about for months and just not had the proper time/motivation. We also saw Star Trek: Into Darkness today. I recommend it. This is a really disjointed post, but that’s about how my brain is still functioning at this point. Or maybe it’s the paint fumes. Lastly, I’ve decided to leave Danger*Cakes after our show in New Mexico next month. This is hard for me to do, because I’ve really enjoyed it, but I figured with starting this new job I need to settle down a bit. Here’s a pic from our CD release party: 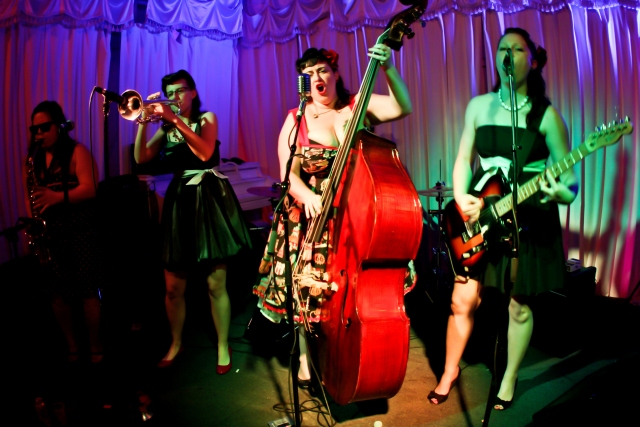 Hmm…so mostly, no idea what I’m going to be doing at this new job. I’d be nervous, but mostly I’m just excited to be trying something new. I’ll keep you posted!

So… 2 AM, first blog post in 4 months sounds like a good idea. I’m not just staying up for no reason, my classes are all in the afternoon/evening this semester so I end up staying up late when I get home and sleeping in the next day. I’m currently working on stitching a lime cat. Game Over, the used game store I sell my game art at, is having an art show in March during SXSW, so I’ve been preparing tons of items to stock my table.

While the art show is most on my brain on the weekends, the biggest update since October is I accepted a job offer at GM! They are opening a new tech center in Austin and I’m going to start there in June, after I finish my certificate in May. The last day of class is April 29th this year, which is the first time I’ve ever heard of a semester ending in April. Unfortunately I still have finals spanning the next two weeks after that, but hopefully Mark and I will get to take a vacation to San Diego or Santa Monica before I start work.

In other news: pantry cookies are the best things ever. Buy 2 bars of Ghirardelli semi-sweet chocolate, and follow the recipe for the chocolate cookies, except use butterscotch chips instead of chocolate, and pecans instead of walnuts. They are outstanding. I am calling them as such because I wanted cookies and didn’t want to go to the store, so I made them out of random things I had in the pantry. Result = success.

Just to throw in some music news, so that this post covers all four categories of my blog, Mollie and I are playing/singing at the Ukulele Society meeting this week! First time I’ve volunteered to play, so I’m looking forward to it.

I’ve made so many items recently I’m having a hard time picking one to feature here. I think I’ll go with my Neo Cortex stitch that won December’s villain’s cross stitch challenge vote: 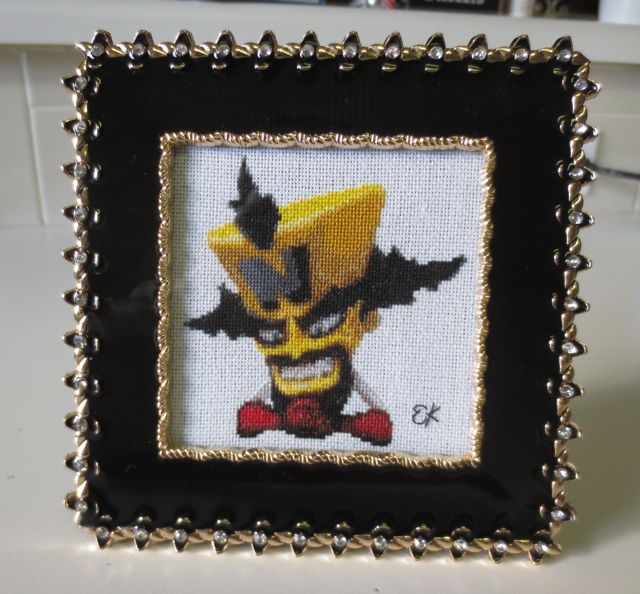 Well, it’s been a long time since I last posted, but I guess I feel like nothing as major as surgery or returning to college has happened in the past 3 months. I think I’ll try to post an update at least every month or so, just in case anyone’s interested in my progress.
First, school: Everything’s going well; digital logic is really hard. I’m actually currently studying for an exam on Saturday morning, which is probably how I ended up thinking now would be a great time to make a blog post. Same reason I baked cookies and cooked dinner last night, I think. Apparently procrastination leads to productivity.

Other news, crafts: I’m currently working on a Halloween sampler, which I certainly won’t finish until after Halloween, because I’m also working on a swap gift that’s also due on the 31st (basically like a craft pen pal, pretty cool.) I may post that when I finish it as well. 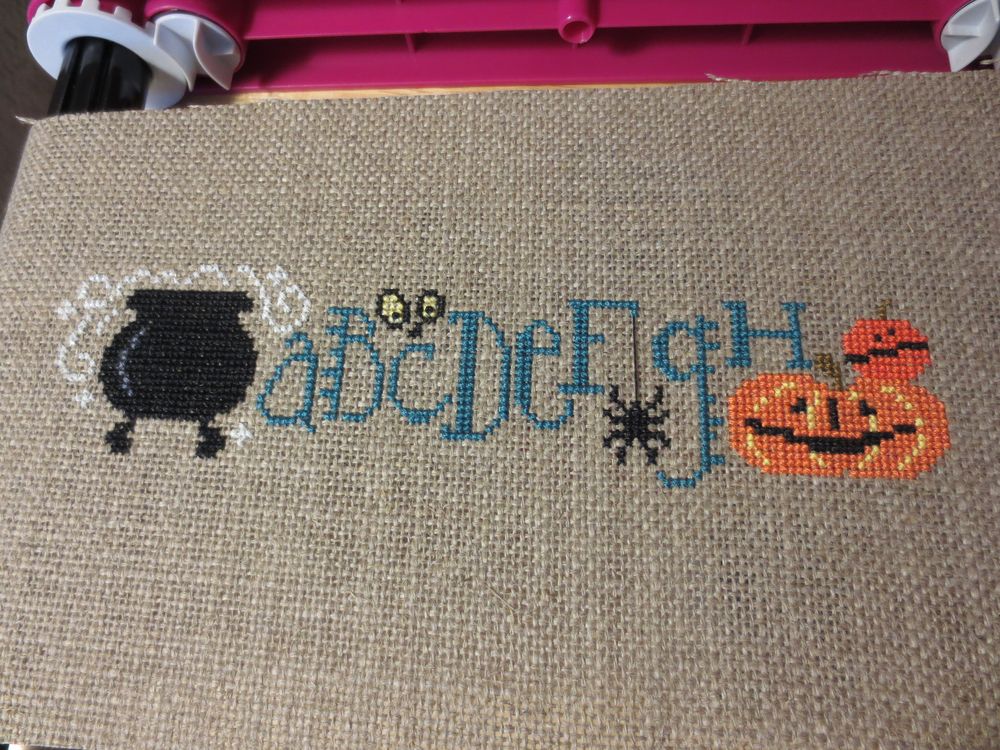 Ooh, fun news: Mark got us tickets to Comic Con this weekend, which includes the entire cast of Star Trek TNG. I’m pretty upset that my exam is during Patrick Stewart’s Q&A, but I’ll get over it. Just means I need to do even more studying tonight because I won’t want to do it tomorrow when we’re seeing Marina Sirtis and Gates McFadden. Other news that makes me squee… going to see Jukebox the Ghost on Monday, and Regina Spektor the next Monday! (which is Mark and my 12th anniversary since we started dating. We’re coming up on the half of our lives together anniversary… need to plan something special for that. Maybe go to Europe 🙂 Assuming I have a job again at some point in the next two years… haha.) Aaaand final exciting concert-related news, bought tickets this morning to see Guster in January! Apparently it’s Erin’s Favorite Bands week.

Hmm.. other music news: I joined a band! I’m playing trumpet in an all-girl rockabilly/punk/blues band called Danger*Cakes. I’ve played with them in a handful of shows in Austin, San Marcos, and San Antonio. We’re signed (with a distribution deal), and our CD release party is next Friday!

Programming news: I’m learning Python and web app development (outside of my actual classes) and I’m looking forward to making some interactive games. I could just regress and make them in Flash, but I feel like pushing myself to do something new. I also really feel like I need to start working on Java again, now that I’m doing things with classes and objects in C++, it makes me want to dust off my OOP chops.

When I string it all together like that, and think that none of that had happened last time I posted, it makes it seem like a LOT has happened in the past 3 months! How about that. 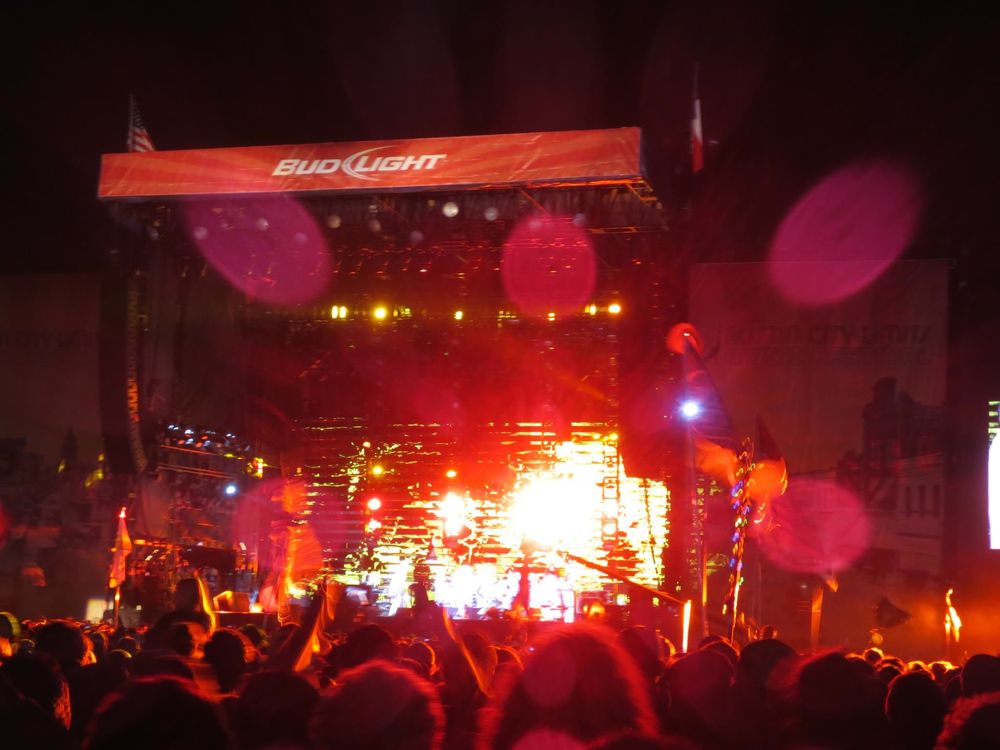 After a long week of commuting and classes, I decided to start an Etsy store, GameCrafts! There isn’t much on there yet, just a few cross stitch patterns I created today. It seems to have a fair bit of traffic, over 80 views today, so I’ll just hope that someone interested in buying a pattern will find it. I will also put completed items on there, not just patterns, whenever I have time to make something.

I have also updated the “Crafts” tab on this page with pictures of some of my favorite projects. Check them out!

Here’s an update on school, now that I’m a week in. I ended up adding a discrete math class, so I have had a lot more work to do than I thought I would. Everything’s been easy enough so far; I am learning a lot though. I also think I really want to continue with a Master’s degree. It may be a little early in the game to commit to 2 more years of school, but after talking with my advisor, I think I’ll be able to finish my background courses in a year, which means I either seek employment or continue school, and school sounds pretty good right now. I definitely plan to do well enough in my classes to make an impression, either at Texas State or UT, so here’s to hoping the rest of the program goes as well as the first week has.

In other news, Tasha got a hair cut this week. Exhibit A, and B: 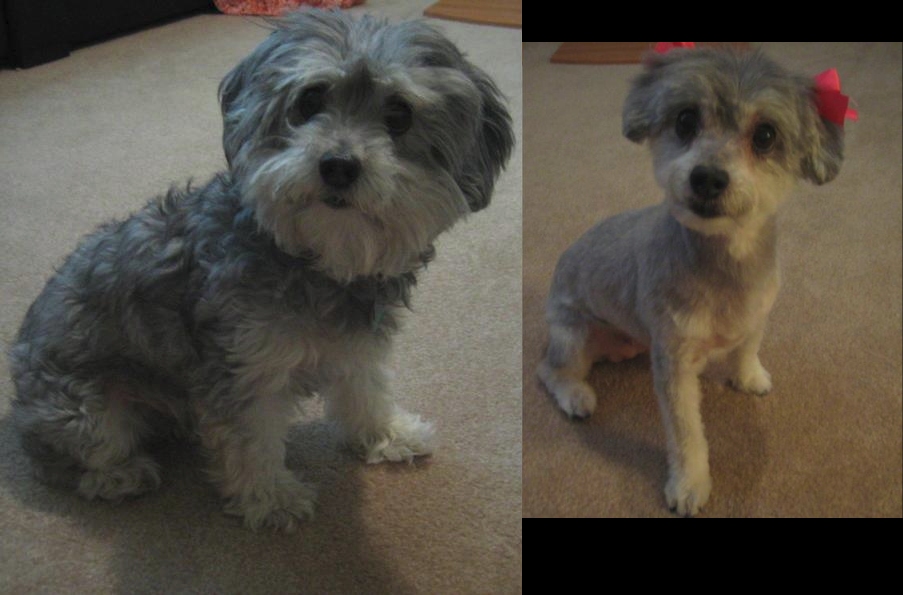 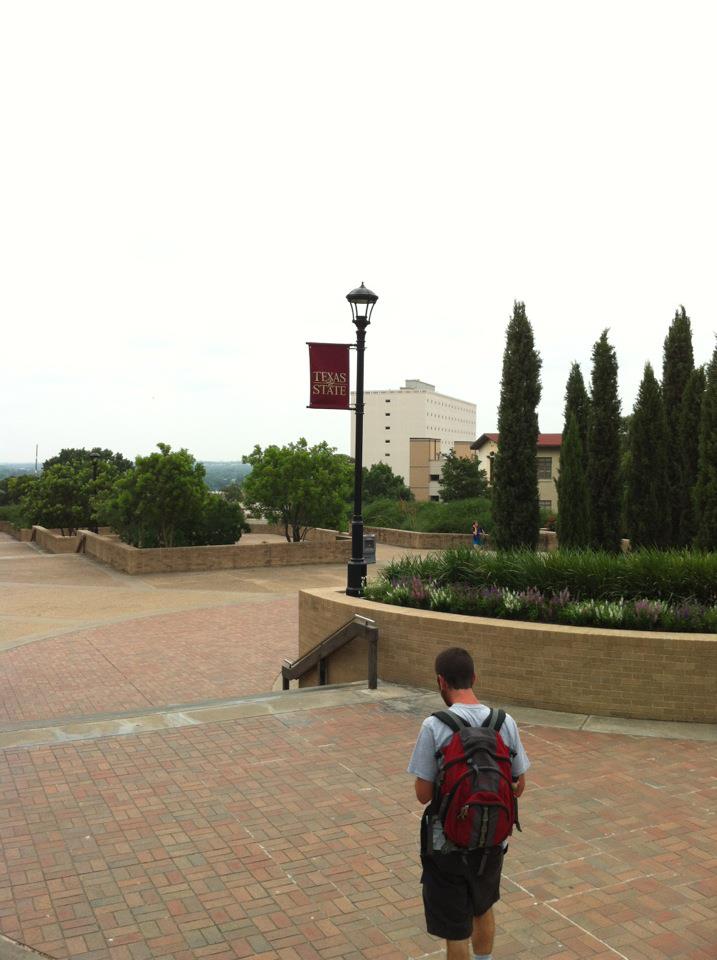 Welcome to my new blog. Today was another big day in a series of big days. Friday was my last day as a teacher, Saturday was my brother-in-law’s wedding (hooray!), Sunday I got quite sick with a cold and had to drive three hours back from the wedding (maybe not as life changing, but certainly notable), and today was my first day of graduate school! I’m only taking one class this summer, so I don’t really feel like I’ve returned to student-dom yet.

In case you haven’t heard my master plan and care to, I’m studying computer science to hopefully develop music software. I still plan to compose/arrange, and if that turns into something of its own, that would be ideal. In the meantime, I hope programming will keep me employed until either I become rich and famous, or raise my future family. This blog will keep you up to date with my latest crazy project, instruments, etc., and take you along with me on my meandering path toward sanity. Won’t you join me? I know I have no idea where I’ll end up; should be fun. 🙂